Posted on June 21, 2017 by Sonia Buchanan in Slider, Sober Living

While running a long-term, young adult treatment center for trauma, eating disorders and addictions, Adcox dealt with too many people who were unable to integrate what they learned in treatment into their lives back home. He was not pleased with the outcomes in mental health and addiction treatment. The more he learned about trauma and how it plays into people’s addiction stories, he began to understand why.

“I found and believe that most all pathology — self-defeating, self-destructive and resistant-to-change behavior — is rooted in emotional trauma,” Adcox says. “For a long time, we were treating the symptoms that manifest from this pathology and neglecting to look at the narrative driving addictive behaviors.”

When Adcox integrated trauma into the addiction and behavioral health treatment program, he saw better outcomes. People emerged with a deeper sense of clarity, grace and emotional freedom.

“I’d see people more awake emotionally than people in mainstream who weren’t struggling with addiction,” Adcox recalls. “I asked myself, ‘How do we take this information that — at the time — was only reserved for people who had experienced face-plant moments in life and make it available to a broader audience?’ I wanted to move from the rehab business to the ‘prehab’ business and deliver the recovery community’s invaluable message to a broader audience.”

In 2006, Adcox took over the reins of leadership at Onsite and has since developed it into an internationally known brand with a world-class team reaching thousands every year from around the world. Its dynamic approach to healing emotional pain and building resilience remains the foundation for the balanced living, healthy relationships, and professional and leadership trainings Onsite offers today. 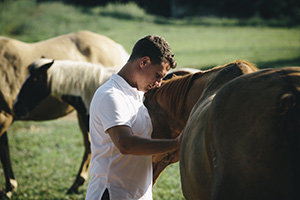 When the workshop facilitator asked for a volunteer, Bill Lokey raised his hand. Although Lokey was working as a therapist and actively participating in a support group back home, he was still struggling with depression. He signed up for the professional training at Onsite, hoping to figure out how to stop shame and fear from running his life.

“There was this public side of me, but then there was this private side that shame ruled,” Lokey recalls. “I had to do something about that, or else anything I did, even in the therapy field, was going to be on the surface. I knew I had to do some deep work to change that; otherwise, what did I know about integrity, about being a truthful person?”

The leader instructed Lokey to draft fellow trainees to represent each person in his support group and position them throughout the room in a way that symbolizes their relationship dynamics. So, if two support group members were close, Lokey placed the two workshop participants he designated to portray them near each other.

Lokey sculpted how he saw everyone in his support group, but no light bulb went off. Then the facilitator handed Lokey a bunch of ropes and directed him to give an end of each piece to all the people for whom he felt responsible for their emotional welfare. His jaw dropped.