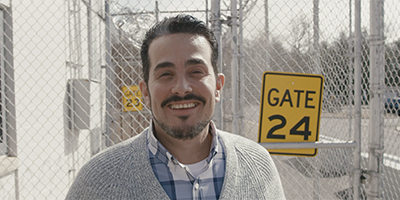 Peer health navigator Joseph Hughes will be out of prison on August 1, 2019.

Nobody wants to return to prison except people like Joseph Hughes, who spent 13 years locked up.

On a recent spring day, he fished a beaded necklace out from under his collar and showed it to the inmate seated across from him in the prison cell.

Hughes, who has been drug-free for eight years, is one of 30 former inmates and addicts who now work as peer health navigators in the Intensive Recovery Treatment Support (IRTS) program at Rutgers University Behavioral Healthcare. In their new roles, they are helping society to fight the opioid epidemic, reduce crime and recidivism, improve public health and save tax dollars.

The IRTS program was launched at Rutgers in January 2018 in partnership with the New Jersey Department of Corrections and Department of Mental Health and Addiction Services. The program pairs the peer health navigators with current inmates who have a history of opioid abuse. Six months before the prisoners’ release, they form a bond and develop a plan to help them re-enter society and stay clean and sober.

For more than a decade, Rutgers has provided physical and mental health care to New Jersey’s 19,000 inmates. The NJDOC asked Rutgers to create the peer health navigator program because few inmates who received treatment referrals for addiction were following through after they were released.

“Studies have shown that peer support specialists with shared experiences who assist newly released offenders significantly improve the success rates of re-entry into society, especially when it comes to mental health treatment and sobriety,” said Mary-Catherine Bohan, vice president of clinical services. “This program takes the concept one step further by allowing the peer health navigators to establish a relationship with inmates while they are still in prison and then remain with them for one year after release to ensure they continue treatment.”

The Rutgers program can serve 600 people, 200 of whom receive medication-assisted treatment and 400 who receive other addiction treatment services, such as psychotherapy. The team includes peer health navigators, case managers and a nurse.

“The program developed at Rutgers speaks powerfully to the connection between the university and the Department of Corrections,” said Herbert Kaldany, director of mental health and addictions for the NJDOC. “By providing a pillar of support to released offenders, the peer health navigators create a stable environment in which offenders can thrive as members of society and thus are helping the state address the opioid epidemic and reduce crime.”

Hughes believes his life would have turned out differently if the peer health navigator program existed during the 13 years he was behind bars. “In prison, you don’t talk about your emotions,” he said. “I didn’t know recovery was even possible, but the inmates today listen to me. They see the abscesses and scars on my hands and arms. They know I’m for real, that I’ve been where they are now.”

That shared perspective is something that clinicians do not have. “Most people released from prison have difficulty finding housing, employment and treatment on their own, which leads them to recidivism and overdoses that often lead to death,” Bohan said. “Peer health navigators are trained to assist these people with whatever they need to transition and maintain their sobriety, whether it’s providing transportation, making a connection with social services or identifying housing, educational training and employment opportunities.”

“As crazy as it seems, I look forward to coming to prison because it’s gratifying to help others. When people I used to serve time with see me in professional clothes and ask me what I’m doing back in the prison, I tell them, ‘I’m here to show you that there is hope.’”