Posted on January 25, 2019 by Sonia Buchanan in CRCs, Slider 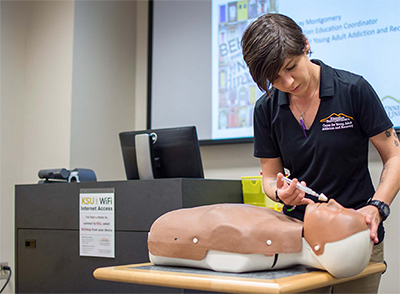 Lindsay Montgomery, alcohol and other drug prevention coordinator at Kennesaw State University, trains on how to use Narcan.

Schools are saving lives by training faculty, staff and students on how to administer naloxone and providing free kits throughout campus and beyond.

Opioid overdoses do not discriminate. They affect people of every age, race, gender and socioeconomic status. According to the Centers for Disease Control and Prevention, drug overdoses killed 63,632 Americans in 2016, the most recent year studied. Nearly two-thirds of those deaths involved a prescription or illicit opioid. Young adults are an especially vulnerable population, leaving college campuses at the crossroads of life and death.

But schools are starting to take charge. Increasingly, colleges and universities are training faculty, staff, campus police and students on how to use the opioid reversal agent naloxone and providing them with free naloxone kits so they can act and save a life in the event of a suspected overdose.

Naloxone restores breathing and responsiveness and can be administered either through a nasal spray, a prefilled auto-injector or injected via a needle in a syringe. Since 2016, Adapt Pharma (now Emergent BioSolutions) has been promoting affordable access to its Narcan Nasal Spray to student populations by offering a free carton to all high schools in the United States through the state departments of education. This program collaborated with the Clinton Health Matters Initiative, an initiative of the Clinton Foundation, as part of its work to scale naloxone access efforts nationally. In 2018, Adapt Pharma increased its allotment to two free cartons to high schools and expanded the initiative to eligible colleges and universities. Currently, the program serves approximately 1,773 high schools and 338 institutions of higher education.

“College campuses are starting to see instances of students using different types of prescription medication — not just illicit drugs,” says Emergent BioSolutions spokesperson Thom Duddy. “They don’t know where they are getting these medications and if they contain opioids. We want to protect this vulnerable population and not make it a financial burden for universities to provide these Narcan Nasal Sprays.”

Following are how two universities are using naloxone training and distribution of free kits to help save lives during an overdose.

Since mid-2016, the Center for Young Adult Addiction and Recovery (CYAAR) at Kennesaw State University in Georgia has hosted training sessions on using naloxone. The 45-minute classes, taught by Alcohol and Other Drug Prevention Education Coordinator Lindsay Montgomery throughout the semester, give students, faculty and staff the opportunity to learn how to spot the warning signs of an opioid overdose, what steps to take when they see someone who might be suffering from an overdose, how Georgia’s 911 medical amnesty law works, what naloxone is and how to administer it. Students receive an instruction card and a pocket-sized naloxone kit containing a pair of gloves, a nasal spray with two readily available doses of naloxone and a card with Montgomery’s contact information. This is all free of charge to Kennesaw State community members who would like to be equipped and trained in administering naloxone.

KSU takes overdoses seriously. Its police department was the first university police department in Georgia to be trained and equipped with naloxone kits. Class participants are taught to call 911 or the university’s emergency line first if they suspect an overdose. CYAAR also equips and trains all resident assistants with naloxone kits in the dorms on both its Kennesaw and Marietta campuses.

“The primary function of naloxone is to save a life,” Montgomery says. “If we can prevent an overdose death, we can provide an opportunity for recovery.”

An overdose occurs when too many brain receptors are blocked by opioids, preventing the signals to breathe and make vital organs function from coming through. “This is how an overdose can become deadly very quickly,” Montgomery explains. “An overdose will start with a decreased level of consciousness and continue to progress rapidly as vital organs begin to shut down. Someone who is experiencing an overdose will likely be very difficult to wake up, unable to communicate, may be sweaty or cold to the touch, have a decreased respiratory rate, and may show signs of hypoxia. 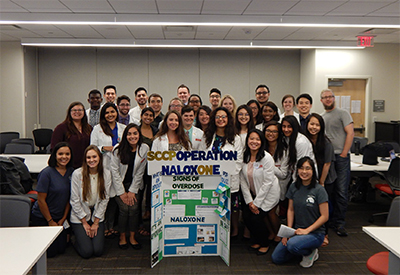 Student coordinators from the Student College of Clinical Pharmacy organization have partnered with Operation Naloxone to educate more than 500 Houstonians.

“The goal in using naloxone is to increase respiratory and heart rate,” she continues. “Naloxone is an opioid antagonist, which means it knocks the opioids off the receptors and takes their place while still allowing signals to come through the receptor. Unlike an opioid blocker like Vivitrol — which blocks the receptors and can only be used once a person has no opioids in their system — an antagonist fights the existing opioids in a person’s system. Because of the amount of energy required by opioid antagonists, reversal is only temporary.”

Montgomery stresses that people who have a successful reversal still need to go to the hospital and receive ongoing care. Because naloxone wears off in 30 to 90 minutes, there is a risk that the person could go right back into an overdose if they have enough opioids in their system.

Naloxone only works with opioid overdoses, not other types of overdoses or with medical emergencies with the same symptoms. However, giving naloxone to someone who is suffering a medical emergency that mimics an overdose will not harm that person. “When in doubt, administer the naloxone,” Montgomery says. “If it is an overdose, you could save a life.”

People don’t realize that many overdoses occur in people who do not have an opioid use disorder, Montgomery says. “Many victims are older people who might have forgotten that they already took their medication and take it again or take the wrong dosage,” she says. “Also, there are first-time users who don’t know what or how much they are taking or pediatric victims who consume prescription opioids.

“No matter who the victim is, they deserve to have a chance at life,” she continues. “Loss of any life is unacceptable, and naloxone provides a chance for people with an opioid use disorder to achieve recovery.”

UNIVERSITY OF HOUSTON: BRANCHING OUT INTO THE COMMUNITY

Students at the University of Houston College of Pharmacy are on a mission to educate college students and the community on how naloxone can save lives. Since May 2018, student coordinators from the Student College of Clinical Pharmacy (SCCP) organization have partnered with Operation Naloxone (operationnaloxone.org) to educate more than 500 Houstonians and have established recurring training sessions throughout the community, including at high schools and recovery centers. To date, the  student initiative has donated 17 Narcan kits to facilities where trainings were given.

The coordinators of the program, which launched in 2016, are currently working to establish an official relationship with the university’s police department, residence halls, student health center and Cougs in Recovery as well as other entities around Houston. It’s also expanding its volunteer base. “This year, we are emphasizing the initiative as a broader outreach and want to have all students at our college of pharmacy to be involved,” says Katie Rascon, president of SCCP.

The one-hour training encompasses an overview of the opioid overdose crisis, the use of naloxone as a reversal agent in preventing overdoses, the dosage and how to administer it. The focus is on using naloxone as soon as someone recognizes an overdose. “Naloxone typically works within two to three minutes in the body,” says Jennifer Dela Pena, outreach coordinator. “Within that timeframe, you should see the reversal of the side effects of the overdose. So, if the person is having difficulty breathing, you should see their breathing become easier. Because there is no toxicity level, naloxone can be administered multiple times if necessary.”

It may take three or four doses to see an effect, notes Rasha Kabbani, an education coordinator. “Some opioids are stronger than others, so you may have to give more doses,” she says. “That’s why the kits come with at least two per package. If the first dose does not work, you should give another. When the paramedics arrive, they will administer a higher dose if necessary.”

The goal of the training is to make people feel comfortable enough to know how to react in a crisis. Participants use training materials provided by Kaleo (EVZIO auto-injector) and Emergent BioSolutions (Narcan Nasal Spray). “Practicing with the training devices lends a tangible aspect to the session,” says Eileell Alin Nguyen, lead coordinator. “We also teach participants Texas law. For example, Texas does have medical amnesty, which means people will not get in trouble for administering naloxone, but if they are in possession of illegal substances, they can be prosecuted for that offense.”

The training includes how to recognize the symptoms of someone who is high versus someone who has overdosed. To make the session more interactive, the coordinators present case studies for which participants can apply concepts they just learned. “In the case studies, we ask questions about the signs and symptoms that could indicate a potential opioid overdose,” Kabbani says. “We try to make the concepts easy to remember. For example, we give them three words to understand what to do after they recognize that someone has overdosed: Recognize, respond, reverse.”

The first step is for people to recognize the signs of an overdose and evaluate responsiveness through stimulation such as shaking or a sternal rub. They should listen for gurgling sounds or stopped or slow breathing. They should look for blue or gray skin, lips or fingernails or pinpoint pupils, and they should touch the person to test for sweaty or clammy skin. If an overdose is suspected, the person should respond by calling 911 and starting rescue breathing. Then, they should reverse the overdose by administering naloxone — more than once if necessary.

The audience varies — as does their reaction to the program, the coordinators say. “When we present at recovery programs, participants ask about the medication, tolerance and the potency of different types of opioids,” Kabbani says. “But if we are presenting at a high school, where students don’t typically take opioid medication, the audience will ask about the drugs and what they do in the body. They also inquire about the least expensive form of naloxone and about insurance coverage.”