Posted on August 28, 2018 by Sonia Buchanan in Slider, Testimonials, Uncategorized

Authentically living “in recovery” means admitting when I’m struggling and when I need help and asking for what I need. 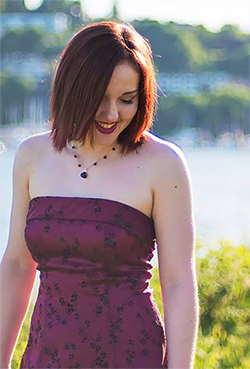 The rollercoaster began when I was 13 years old. Caught in a mess of anxiety, depression and unresolved trauma, I began to self-medicate with prescription painkillers and benzodiazepines to numb the agony.

By the end of my freshman year of high school, I was a full-blown prescription opioid addict. Within the first two months of my sophomore year, I was shipped off to a wilderness rehab program followed by a residential treatment center where, in total, I spent 16 months looking in the mirror, looking at my past and looking for the light at the end of the seemingly endless darkness.

At the age of 17, I had branded myself a recovery prodigy. With over two and a half years clean, I had applied to and been accepted into six colleges with merit scholarships, had involved myself in public speaking about addiction through several platforms, became deeply involved in a 12-step program and graduated high school in June of 2017. I accepted enrollment at Simmons College in Boston with a place on the school’s NCAA Division III swim team. Through the eyes of my peers, I was proof that recovery was possible.

Internally, though, I began to struggle again. With my self-esteem so invested in the “recovery rock star” image I had branded myself with, it became harder and harder to admit that my depression and the piece inside of me that still hated to be with myself were getting bigger and stronger.

And, after I graduated high school and began my monotonous summertime routine of going to work, going home, doing not much of anything else before going to sleep, I was forced to be alone with myself more and more. The more days that went by, the closer I came to my breaking point. And then, one day, I broke.

On one afternoon after another boring day at work, I took three buses from my workplace in downtown Seattle to meet up with a stranger I met online who sold me a drug I had never tried before: heroin. And, with my workplace conveniently located just a few blocks from a needle exchange program, clean syringe access was plentiful. Nearly immediately after I picked up the dope, I became an intravenous user.

Even after close to three years without any form of mind-altering chemical in my body, the drug brought me right back to where I was before. That relapse lasted a week. For the first few days, the drugs were a blast of relief from a life that had become dull and stagnant. But by the sixth day, the drug use itself became bland and monotonous like before, and when I made the decision to tell my loved ones and put down the substance, I left myself a mess that I began to believe would be impossible to clean up.

Yet when those closest to me in my support system suggested that maybe I should wait a semester or two to get myself back on track before going across the country to college, I pushed back. I became defensive. I willed myself through the rest of the summer clean. There was no way I would allow them to think I wasn’t strong enough for college, for Boston, for all of the things that waited for me on the other coast. I rationalized and justified to myself that everything would be OK — better, even — in Boston. I didn’t have a drug connection there anyway, right?

I left for Boston at the end of August. Within a week into September, I had walked out onto the streets of the new city and asked a shady-looking man for dope. He sold me the drugs, and that night, I had a needle in my arm and a hole in my ego. Again, within a couple days, I phoned home and told my family and begged to let me stay. I was liking my classes. Yes, I was still going to swim practice. This wasn’t too unexpected. I mean, I just got to college.  It was a big transition, right?

I turned that slip into one slow, deep fall. I was torn between the life of a diligent, functional, athletic college student and that of an apathetic, depressed junkie. I wanted so badly to live both lives, and my attempts were thorough but ultimately unsuccessful. I used infrequently, justifying it all to myself, sometimes straight-up denying to myself that I had done anything. I planned my using around my swimming, around my drug tests, around my classes.

But despite my best efforts, things fell apart. My class attendance began to fall. Friends and family members started to notice I was “off.” My local therapist and family began to suggest that I take some time off of school and even go to a higher level of care, but I refused. I knew what it took to be clean and be successful. I had done it before. I didn’t need anyone else’s help. I had earned my place in college, and I wasn’t about to give it up. In my mind, taking time off, going back to treatment, whatever they wanted me to do, would be an indication that I had failed. I did not want to be a failure. I had worked too hard to overcome that.

In early November, I was caught on an elevator security camera buying heroin from a street dealer in Boston. The officer was willing not to arrest me under the condition that I handed over the drugs and the information I had on the dealer. He said he noticed that I was young and didn’t want me ending up like the others he witnessed on the streets every day, so he simply filed a complaint and ordered me a hearing to determine whether or not criminal proceedings would occur. I was grateful not to have been arrested, but I felt ashamed and exposed and began to come to terms with the fact that I was no longer hiding how much I was hurting.

Less than a month after that cold November day, I asked my parents if I could leave school and go back to treatment. They supported me fully. Everyone seemed supportive. My school helped me apply for incomplete grades for fall semester and a leave of absence for spring, friends from both Seattle and Boston rallied around me with messages of love and hope, and my therapist and parents worked together to find me a program. Within a week, I landed at a residential program in Nashville.

I spent 10 weeks in the residential program, and I currently live in a sober living house, also in Nashville. During my time here, I have been able to remotely complete all of my first-semester schoolwork for Simmons and am working with the administration to hopefully return next fall. My swim coach has promised me a spot on the team should I return, but also told me that my recovery was most important.

More importantly, I have been able to take these last few months to pause from all other distractions and sit with myself, get to the core of my issues, and learn to accept and love who I am today, despite my imperfections. I am proud of my recovery, of my academic capabilities, and still strive for success, but my self-esteem is no longer invested in these things. I am exactly where I need to be today, and therefore, I am good enough.

I have learned that there is nothing more important than my recovery and my well-being. And authentically living “in recovery” means admitting when I’m struggling and when I need help and asking for what I need. After all, my accomplishments have only occurred as a result of the internal progress I have made throughout my time in therapy, 12-step work, etc. My path has not been “conventional.” It’s taken time, effort and some pretty painful surrenders. But I feel so grateful to say that I am finally happy, right where I am, here, today.