Posted on September 11, 2019 by Sonia Buchanan in Featured, Slider 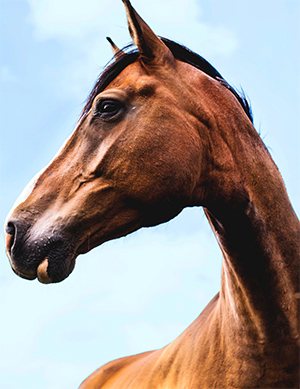 As a person living with complex post-traumatic stress disorder (PTSD), I’ve found that talk therapy — while immensely beneficial — has only been able to take me so far in my journey of healing. Words matter. But sometimes our trauma is so deeply hidden that you lack conscious awareness of it: You can’t heal what you can’t see. Animals, however, have the potential to create dramatic results where words cannot, especially for those with emotional and mental disorders.

I can attest to those benefits: The relationship and healing that I’ve achieved with my dog, Bowie, over the past eight months can only be described as magical. Her companionship, the loving glances from her big brown puppy eyes, her playfulness and her cuddles take healing to a profound new level that therapy was never able to reach. I laugh more, I feel comforted by her presence and I experience more joy — all emotions that are difficult to achieve alone in the first few years of trauma therapy. With Bowie, I learn to be present and I experience a kind of love and loyalty that is like no other: pure unconditional love and adoration. I also think that the responsibility of caring for an animal makes me consider another being other than myself, which can take the pressure off when I’m in a particularly stressful or emotionally triggered state.

A man who knows the power of animals well is Tim Hayes. Described by Robert Redford as “a great storyteller with passion for his subjects, horse and human,” Hayes brings the unique powers of horses to people’s need for healing. An adjunct professor of behavioral science at the University of Vermont and Northern Vermont University, Hayes teaches courses in equine therapy, instructing students on its principles, methods and techniques. As a natural horsemanship clinician, Hayes also runs clinics throughout the U.S., Canada, Europe, New Zealand and Mexico. He authored the bestselling book Riding Home: The Power of Horses to Heal, which shares the power of equine therapy as a force of healing and love that can’t otherwise be achieved by other means of therapy.

I talked to Hayes about his horse, Austin; about his book; and about his experience of using these amazing creatures for healing in the world.

Hayes became involved with horses in 1993 when he was visiting a friend who introduced him to a family with a cattle ranch. “They asked me if I’d like to ride a horse,” he says. “Sure, I said. But I’d never ridden a horse before, and I was 48 years old.” The moment he got onto the horse, it lit a fire inside of him and he became so passionate about horses that “I wanted to learn everything I could,” he says.

“While working with a horse, I had a revelation so powerful that it brought me to tears. This was one of the biggest eye-openers of my entire life. I am definitely going to look back on this for a very long time.” -A student from Tim Hayes’ Course

In 2003, Hayes left the film business and started a new career helping people with their horses. Over time, he observed a connection between people and their horses “that sort of mirrored their personalities,” he says. Around the same time, equine therapy was born in the capacity in which it is known today. However, Hayes explains it had been around some 60 years ago when horses were used in Germany to help rehabilitate people with physical challenges such as multiple sclerosis, polio and cerebral palsy. “After riding the horses, people would experience enormous physical healing through the movement of the horse. They were also improving emotionally and started to improve their self-esteem,” Hayes says.

It was the observation that horses created emotional healing that led to the movement of using horses to help heal trauma and depression. Through his research and working with horses, Hayes realized that he, too, was attracted to horses to help him process his childhood trauma.

As Hayes saw the equine therapy movement grow, he knew he had to write a book to create more awareness and to pass on the healing benefits of horses. “As they say in recovery, if you want to keep it, you have to pass it on,” he says.

The book, 10 years in the making, was published four years ago. This is the first book to scientifically and experientially explain why horses have the extraordinary ability to provide breakthroughs for those in recovery from substance use disorders, those with PTSD, children with autism and at-risk youth. The response was phenomenal, and as a result, he was asked to teach at the University of Vermont and North Vermont University.

Hayes explains that horses have a lot to teach us. They’ve been around for over 50 million years, compared to humans who have been on the planet for 200,000 years. He believes the reason horses have survived is because they are a prey species, which means they have an innate ability to get along, and their hypervigilance allows them to spot danger and run away from it. “They don’t confront you and bite you. They’ve survived for 50 million years by not killing,” he says. Horses get by because of how they interact with predator species, like humans.

Hayes explains that horses have the ability to heal because, unlike humans, they don’t judge — horses don’t care about your past. “They want to know if you are going to be friendly and if they’re safe with you.” 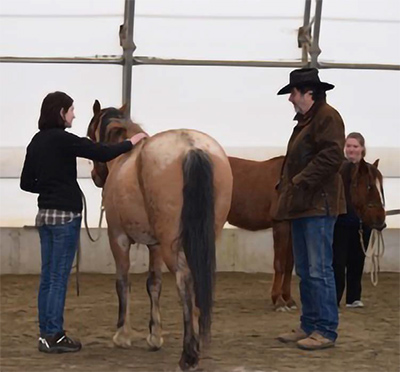 Tim Hayes teaching equine therapy at the University of Vermont.

The healing starts once the horse determines a person is safe to interact with and in their acceptance of them. “It’s very powerful to have this huge animal be friendly with you. You’ll never feel judged,” he says.

“I work with veterans, including someone who has been in combat,” he continues. “They have experienced horrific things. And they carry that with them after the war, and it’s enormous shame, self-doubt, and self-loathing. They don’t want to talk about it — perhaps to other soldiers, but that’s not going to help them heal. So when I work with a veteran and a horse, the horse doesn’t care what the soldier experienced; they just want to know if they can be friends with the person and feel safe. Sometimes, it’s the first time since they’ve been home from overseas for two years that they ever felt loved and accepted for who they were. It’s beautiful and it’s instantaneous — something that might otherwise take over six months working with a therapist.”

What’s also healing about horses is their hypervigilance, something that people who have suffered from trauma know all too well. Not unlike soldiers, those who have a history of childhood trauma or a traumatic drug use history are also hypervigilant. We become masters at a young age of spotting a potential fight in an emotionally turbulent home, for example. When hypervigilant people work with horses, they see this trait in the horse. 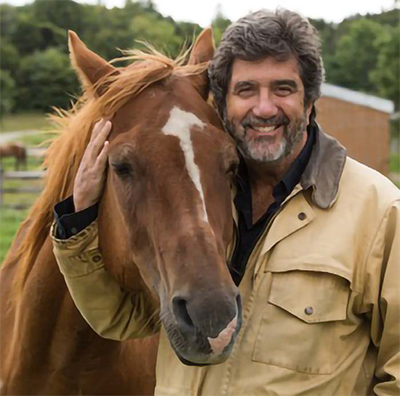 Hayes and his horse, Austin

“When a person with an emotional wound meets with a horse, they identify with the hypervigilance of the horse and vice-versa,” Hayes says. “The moment they know that they’re safe and want to get along, they feel accepted, kindness and compassion. It’s beautiful to see. This is what makes horses very different when it comes to interacting with humans. I have found that at the bottom of every emotional pain a person has — whether it’s addiction, an eating disorder, sex addiction or PTSD — at the bottom of all is, ‘I don’t feel good about myself.’ They have low self-esteem.”

“A horse can be the first time that a person really felt self-acceptance and the acknowledgment for who they are, no matter who they are,” he continues. It is that acceptance that helps the healing to begin. In people with substance use disorder, Hayes has seen breakthroughs in as little as one session, particularly around the issue of denial. “Horses break that denial and get a person to start to look at themselves in a way that the person doesn’t feel criticized or judged,” he says.

What typically happens in equine therapy is that a person is encouraged by the therapist to walk toward a horse. They see the horse take a few steps toward them and look them straight in the eye. “Maybe you want to touch the horse and the horse moves closer to you and starts to breathe on you,” Hayes says. “You just feel this love and acceptance and say, ‘God, I love the way I’m feeling,’ to the therapist, who asks what’s going on for you. Suddenly, people start opening up and talking — they might explain that they were feeling bad about themselves or whatever else they’re struggling with.”

People find that the painful emotion dissipates more quickly and they experience healing in a way they haven’t before, Hayes explains.

That’s pretty profound. For many in recovery, therapy isn’t accessible: It’s either too painful to talk about, too deeply rooted or not financially available. Animals, however, may be a more accessible next step. I know that for me the benefits have been immeasurable.

For more information about Hayes and equine therapy and to read his book, visit hayesisforhorses.com

Writer and wellness advocate Olivia Pennelle (Liv) passionately believes in a fluid and holistic approach to recovery. Her popular site, Liv’s Recovery Kitchen, is a resource for the journey toward health and wellness. You will find Pennelle featured among top recovery writers and bloggers, published on websites such as recovery.org, The Fix, Intervene, Workit Health, iExhale, Sapling, Addiction Unscripted, Transformation Is Real, Sanford House, Winward Way and Casa Capri.