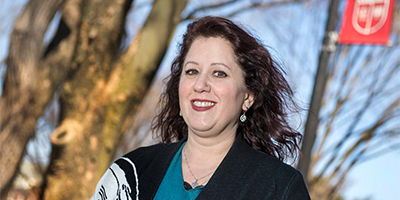 Rutgers graduate Fae Cushing, who struggled for decades with addiction and mental illnesses, is now giving others the tools to get well.

As an adolescent, Fae Cushing became addicted to drugs and alcohol, entered into abusive relationships, was on food stamps, and failed out of college her freshman year. At 21, she decided to enter a 12-step program. “I knew I would die if I kept on the path I was on,” she says.

“The road to my degree took a lot of courage,” says Cushing, a Bridgewater, New Jersey, resident, who credits her success largely to the support of her husband, two adult children, and a close-knit group of family and friends. “I went to school because I wanted to show my kids that this is possible.”

As Cushing progressed in her recovery, she suspected there was still something wrong. She saw a physician and was diagnosed with depression and anxiety and began a life-changing regimen of antidepressant medication. “I realized I had been self-medicating using substances to manage conditions I never knew I had,” she says.

Even with the medication, however, she struggled to hold a job and make social connections. Knowing something was still wrong, she visited another physician who diagnosed her with post-traumatic stress disorder and panic disorder. She tried new medications, but no treatment worked for long and her depression ultimately confined her to bed. “I worried about how my daughter was being affected by watching an otherwise independent woman having to rely on her husband to care for her. I didn’t want to give her the message that it was OK to be helpless.” Cushing entered an outpatient mental health facility, and she saw things change for the better.

She was 44 when her mother told her that Rutgers had a program that focused on psychiatric rehabilitation. “A little bell went off in my head, and I thought, ‘This just sounds right,’” she says. “I was scared because I had failed so much in the past, but I went to the first class and got an A. Then I went to the second and got another A. That was my turning point: I began to concentrate on what I could achieve as opposed to how I might fail.”

She started seeing connections between her classes and her life. Empowered, she adopted the motto “Grow, change, and evolve” and began building upon what she learned in therapy, from being in recovery and her classes. “I decided to pay it forward by teaching people who suffer from undiagnosed mental health conditions the tools they need to be well,” she says. “At mid-life, I finally found my calling.”

Cushing especially wants to use her experience and education to combat the stigma she faced. “Mental health is not tangible: When you break a leg, you know you need to get a cast, but many people with mental illness do not have the self-awareness to know something isn’t right,” she says. “The stigma is horrible. People — even doctors — have told me that it’s all in my head and that I had control over my anxiety. That’s got to change. People never should feel ashamed to ask for help with their mental health.”