Posted on November 2, 2016 by Sonia Buchanan in Slider, Spiritual 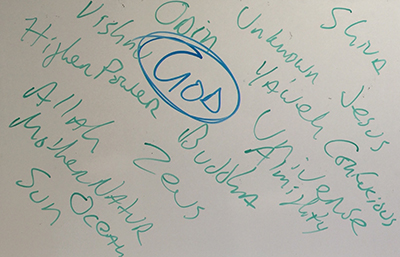 Spirituality in the 12 steps

God. How I detested that word…… I was raised in a Catholic family and went to church, religious education too. I have an uncle who’s a retired Catholic priest, and I was an altar boy for a period of time (unscathed, sad as it is to have to offer that disclaimer). I was baptized, did the confession thing, took communion and got confirmed. The trouble was that I was unable to reconcile what was being pitched in church on Sunday with what I was observing and experiencing Monday through Saturday. Now, I mean no disrespect to the Catholic faith or any other faith for that matter. It’s just that religion ended up not serving me. It was confusing and contradictory, and so I left the whole thing behind, God and I going separate ways. This division ended up so thoroughly woven into my fabric that when I got married for the first time some years later, I arrogantly told the minister that Jesus wasn’t invited to the wedding, and for that matter, God didn’t have to come either. Yeah, it was just like that.

So imagine my surprise when I finally got to the rooms of recovery and saw that WORD on the wall! God……not fair!

Maybe you had a similar reaction. Many of us have, and “the God thing” has been a source of a lot of discontent. It’s kept many from abandoning themselves to the steps of many a 12-step program. Were I not so completely desperate, it might have kept me away too. But the pull of something better than what I had was simply too strong.

Before I continue, I’d like to get a couple of things clear so as to position the rest of this piece in the proper light. The first is whatever your conception of God or a Higher Power, it’s equally as valid as anyone else’s. Mother Nature often comes up, and that’s cool. Maybe it’s the power that moves the wind, a deity, someone like Jesus or Allah. Maybe it’s the universe, a deceased relative. Whatever serves you is fine for the purpose of what’s happening here.

Secondly, I am going to use the word “spirituality” a lot. How we’ll define that for the purposes of this conversation is simply as “something bigger than you, outside of you.” That’s it.  When you and me connect, that’s a spiritual experience. You and me are bigger than just me. Me and my Higher Power, when we’re connected, is bigger than me. When I feel that feeling of awe and wonder in nature, that’s a spiritual experience. And in all these cases the connection happens first outside of me before it works on the inside of me.

Finally, as represented in the picture at the beginning of this article (I ask groups to come up with different names for God and this is the sort of thing they come up with), God has a LOT of different names. That’s fine too. When I lecture on spirituality I have the folks I am talking to close their eyes and picture a table. Clearly though, really see it. The size, color, how many legs it has, its shape. Really burn it into their mind’s eye. And then I have them open their eyes and I ask, “How many pictured a round table? A square one? Tall? Short? Dark colored or light? A coffee table, a dining room table, an end table.” Hands go up and down like pistons in a car motor. Everyone has a slightly, or perhaps VERY different idea of what their table looks like. And then I ask them, “John does your idea of a table invalidate Bob’s? Bob, is yours more a table than Sally’s?”