Posted on April 6, 2017 by Sonia Buchanan in Slider, Spiritual 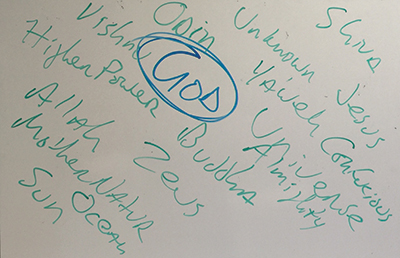 Spirituality in the 12 Steps

In part one we learn about the ways spirituality and God found itself into our current dialog and we discover that we get to define our own version of God. Your God doesn’t have to be my God. We leave part one with a story about a fellow named Ebby T and Bill. Check it out in the Fall 2016 issue. www.recoverycampusdigital.com/fall2016

That brings us to part two where after defining who our higher power is we can now explore ways to use that power to our great advantage.

Here we are more than 80 years past that conversation and God, and “as we understood Him” remains a central theme in the rooms of recovery. So much so that in Alcoholics Anonymous at least, those words are the only ones italicized or underlined in the steps.

Bill knew firsthand how important this was – for me it was the loophole that allowed me to remain – and he knew how divisive God and religion was to a bunch of ego-maniacal, self-righteous, obstinate alcoholics. Bill did not stay sober from that moment on but what did change is he followed Ebby’s lead, began attending Oxford Group meetings and doing the deal with them, finally had his “white light” spiritual experience in his last stay at Town’s hospital and ended up getting sober for good on December 11, 1934. Bill carried the message to Dr. Bob and his sobriety date – and the date of the beginning of Alcoholics Anonymous, the granddaddy of all 12-step groups, is June 10, 1935.

Now, for those of you keeping score at home, that meeting at the kitchen table in Bill’s father- in-law’s place was the flashpoint of Alcoholics Anonymous. Consider the divine nature of what had occurred to that point:

Rowland H. is introduced to the idea of a spiritual experience by Dr. Jung, gets involved with the Oxford group and enlarges on that experience, and takes Ebby under his wing. Together they practice the Oxford Group tenants that, among other things, involve selfless giving in service

of others as well as making restitution for past wrongs. Ebby gets sober and ends up at Bill’s table, introducing the idea of a God of Bill’s own understanding. Bill buys in and begins his journey to permanent sobriety.

That’s it! That’s the whole thing right there, the basic principles of AA and other 12-step fellowships.

Now of course, Bill enlarged on what he learned and had his own spiritual experience; however everything he put together was in essence borrowed from the people he met and the places he went. As he and Bob began to help others get sober and stay sober, he found that selfless service to other alcoholics worked in a way that nothing else did. The key element though, the thread, the lifeblood running through all of it was a connection with a Power greater than oneself that was the guidepost and the source of strength.