Home / Featured / From Federal Prison to a Doctoral Program

From Federal Prison to a Doctoral Program

Posted on January 30, 2019 by Sonia Buchanan in Featured, Slider 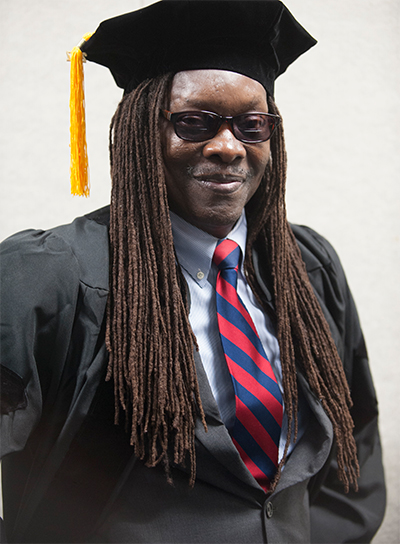 How one man turned his life around 180 degrees

George Walker achieved a perfect SAT score in high school, briefly attended the college of his dreams — and then got deeply involved in drugs. By the time he was 34 years old, he had spent 13 years of his life behind bars.

After cleaning up his act, Walker wanted to finish what he started decades prior and return to college. He sent in applications and got back a lot of rejection letters and only one acceptance letter — from Barry University in Miami. “They said they were not as interested in where I’ve been as much as where I want to go,” Walker says.

Today, Walker has a master’s degree and a doctoral degree in mental health counseling from Barry University. “Everyone should get a second chance,” says James Rudes, an associate professor at Barry and Walker’s dissertation committee chair and adviser. “It doesn’t take long to see that George has all of the skills and abilities to shine. He was good at bank robbery. He’s a better PhD.”

Recovery Campus sat down with Walker to talk about second chances, overcoming obstacles and how a university can help change the course of someone’s life.

Recovery Campus: What did you want to be when you grew up?

George Walker: I grew up in Harlem in the northwest section called Sugar Hill. I just wanted to grow up. I hated the situation I was in. Both of my parents were dead, so I lived with my father’s sister. I wanted to hurry up, grow up and get out of there. Eventually, maybe when I was a junior in high school, I thought I would have loved to have been a history teacher.

RC: So you enjoyed school?

GW: I loved to read. I could read by the time I was 5 years old. I read everything I could get my hands on. I couldn’t eat without reading. I couldn’t go to sleep without reading. I remember the first time I read Gone with the Wind. I was maybe 9 or 10 years old. I read the entire book. I felt frustrated that it was over. How could it just end? So I turned right back to the beginning and started reading again.

But I was a shy kid, and the way I dealt with it was humor. I was a class clown. I fooled around. The other thing was that I wasn’t interested in most of the stuff they were talking about. School came very easily. I wanted to do something else. I wanted to be a part of the guys who were hanging out.

So I started using on a pretty regular basis. Drinking wine every day for lunch. Smoking marijuana. Sniffing heroin. Not only was it what everyone — not everyone but the group I wanted to be a part of — was doing, but it seemed to fill this hole or emptiness inside of me. When I did the drug, it allowed me to feel and to not feel. Immediately, drugs made sense to me.

RC: Despite that fact, you not only made it through high school but also got a full-ride to Wesleyan University in Middletown, Connecticut. What was your first collegiate experience like?

GW: Wesleyan was a different planet. Not even a different world. I’d never ventured out into white America before. Growing up in New York, it’s not the same. I love Midtown. I hung out in the Village. I love going to movies, museums, Central Park. That was not Wesleyan. Not small-town white America. When I landed there, I had no precedence. Nothing prepared me for that culture shock. People spoke differently. Their basic assumptions about life were far removed from what mine were.

Historically, Wesleyan is a wealthy, academically accomplished institution. It had recently opened up its doors for poor black students. There were the wealthy black students — and then there were the 12 of us. We called ourselves The Dirty Dozen. We showed up from places like Harlem and Watts and Buttermilk Bottoms in Atlanta. We were from the street. Not only did we feel different from the larger population, but we were also different from the black population. And we clashed. I remember going to class with an African spear. I guess I was hard to swallow, too.

RC: What led you to drop out?

GW: This was a time of tremendous upheaval in this country. The U.S. was close to a civil war. I wanted to be a part of that. Growing up in a northern large black urban environment, I’d look at the TV and see people having dogs sicced on them and water hoses sprayed at them and the National Guard escorting them to the classroom. I couldn’t understand it. I remember asking my aunt, “How come they don’t fight back?”

Now you have got a dozen George Walkers in the same place. There was a pretty active Black Panther Party in the city of New Haven, which was about 15 minutes away. So we left Wesleyan to go into training in 1969. At the end of that training, we were to report to party headquarters in Oakland, California. I became very disillusioned with the Panther Party due to some of the things we saw when we were in Oakland. I gained a fuller sense of what we were talking about when we were talking about armed struggle in the U.S.

RC: Were you using this entire time?

GW: The only time I didn’t use substances was when I was in the Black Panther Party. When I left and returned to Sugar Hill, I started shooting heroin. We turned from politics to banditry. We were stick-up boys. We didn’t take anything from individuals. We didn’t mug people. We took from drug dealers. We took from people who were out there in the life. We started to get a reputation. 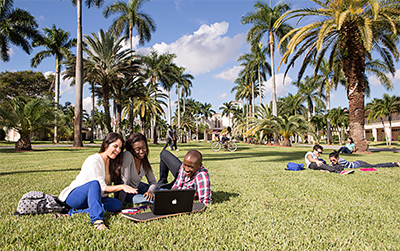 Barry University in Miami wasn’t as interested in where George Walker had been as much as where he wanted to go.

I lived life as if this was it. As if every day was my last day and that was OK. Eventually, I got arrested, and that was it. For the next couple of years, I was incarcerated. I was released on parole and went right back in for another five years. I was out again for two and a half years, and then I was back in again for more bank robbery charges.

By the time I was 34 years old, I had spent 13 years of my life in a cage. I didn’t want to do it anymore. That didn’t stop me from using, though. I continued to use for the next 14 or 15 years. I went from doing heroin to shooting cocaine to smoking crack. I stayed on the streets of New York for almost 10 years.

I had family, but I couldn’t let my family, who had always seen me as one type of person, see what I had become. I was so full of shame. I couldn’t stand myself anymore. I had abandoned three children, three families. I couldn’t do it anymore. So I went into rehab again.

RC: How did you end up in Florida?

GW: At the last rehab — the 13th or 14th — I took someone’s suggestion to leave New York. If you’re going to go to a halfway house, why not one in Boca Raton, Florida, right? And that was the beginning of the end. I had my last drink in 2000.

RC: How did you get the courage to go back to school at 50+?

Now it’s 2003, and I’m in Florida managing a halfway house. Why don’t I go back to school? The first place I applied to turned me down based upon my history, which I found fascinating. I thought academia was a place where second chances were embraced and ideas were privileged. Instead, we’re in the 21st-century, and I’m still encountering the same barriers and discrimination that I would have expected in ’50s and ’60s.

Anyway, I had been at an Alcoholics Anonymous meeting. The speaker had an almost identical story. He had just completed his master’s degree. Of course, my ears picked up. He said he went to a place called Barry University in Miami. I asked him what he did with the question “Have you ever been convicted of a felony?” Barry didn’t ask that question. They said they were not as interested in where I’ve been as much as where I wanted to go. As far as I’m concerned, Barry provided the life that I have now.

RC: How did Barry help not only support your academic career but also your recovery?

GW: The professors provided a different way of seeing the world. Many of the professors at the time I enrolled were heavily involved in postmodernism and social construction. These are ideas I found fascinating. The multiplicity of possibilities. The idea that language is less representative of something we call reality. I could immediately see the utility and the power in these ideas and how they related to people and groups that are oppressed, marginalized and silenced. I gravitated toward it with a passion. So when I finished the master’s, I went directly into the PhD program.

RC: What is your dissertation about? How is it informed by your past?

GW: It’s about long-term addiction and something called ambiguous loss. Ambiguous loss theory is a phenomenon propounded by Pauline Boss that speaks to people who are missing. The family doesn’t know if the missing person is dead or alive, so the usual grief processes are frozen. There’s no body, and you don’t know if the person will turn up tomorrow. How long do you continue to hope? How long do you wait before you move on? Think about soldiers missing in action, the victims of Katrina who were never found, even the Malaysia Airlines plane that disappeared. When I encountered this idea, it immediately resonated.

GW: It describes my situation. It describes my journey. I was the one who disappeared. I realized I was the loved one who was missing. It’s so applicable to long-term addiction. The person or the family says: “Enough. You have to go.” Then the person is gone. Unlike the dozens of times he left in the past, this time he doesn’t show up in jail or in a hospital or in rehab. There’s no word when you search for him. He’s been gone for a year or two or 10. That’s ambiguous loss. They’re there but not there.

RC: Was there someone at Barry who really supported you?

GW: My committee chair and adviser, James Rudes. As a clinician, he’s one the best I’ve ever seen. I enjoy watching him work with an individual, with a family. As an educator, he introduces some pretty interesting ideas. He’s someone who always pushed me: “You can do this. Believe me,” he would say. And I did start to believe him.

RC: What was the moment like when you became Dr. Walker?

GW: Honestly, graduating was just one more thing that I did. I did that instead of going to iHop and eating pancakes. I don’t show a lot of the outward emotion. Walking across that stage was important, but I’m still very shy.

RC: What are you up to these days?

GW: I’m living in a small town in Connecticut, New London. I’m working for the Southeastern Council on Alcoholism and Drug Dependence detox program. I would love to teach. I believe that’s what I was put here to do. I like to connect with people who are eager to know. One day, I would like to write an autobiography. I figure when I can’t do anything else, that’s what I’ll do.