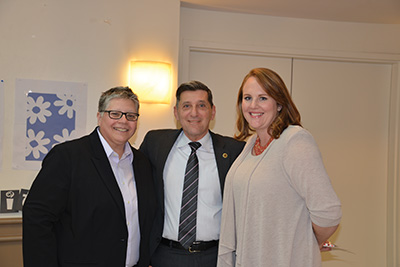 In the movie City Slickers, Billy Crystal and crew are riding horses and begin a conversation about their best and worst days. Billy talks about entering Yankee Stadium as a kid as his best day and then a cancer scare as his worst. They continue, one by one, sharing their stories. When the last character shares his worst day, everyone is listening intently to his difficult story, then they ask, “What was your best day?” and he responds, “The same day!”

On March 6, 2015, I had the privilege of attending the swearing-in ceremony for Michael Botticelli, as Director of the Office of National Drug Control Policy, Executive Office of the President. I was honored to be invited to this historic event and can honestly say it was a joy to be in attendance. The ceremony from beginning to end was uplifting and a true testament to the person Director Botticelli is. The choice of venue was the first noticeable change for such a ceremony:  N Street Village, a recovery community for low-income, homeless women in Washington, D.C. A perfect fit.

After being voted in by U.S. Congress on February 9, Botticelli said: “I am open about my recovery, not to be self-congratulatory; I am open about my recovery to change public policy.” He plans on continuing to establish national policies that recognize substance use disorders as a public health issue, not a public nuisance to be stigmatized. As director, Botticelli will work in the movement toward treatment over incarceration, early prevention, and making treatment more affordable and accessible for all.

The program was stacked with beauty, honesty, and the best that humanity offers. It was about being human, with all our faults and talents, and of rising from the ashes to live in recovery. It was about how recovery works, how lives changed forever will in turn change the world. I left Washington on a really high note with confidence, hope, and pride, waiting to tell the world about one of the best days in my career.

On March 7, 2015, at 2:32 am, after just laying my head down on the pillow for less than one hour, I was awakened by a call from my boss alerting me to come to campus immediately. There was an emergency with one of our students.  As I wrote down the phone numbers of his parents and tried to gather my thoughts, I could not believe what I was hearing. I ran to change clothes and get to my car. My brain was spinning. I tried the first emergency contact, no answer. I tried the next emergency contact and was able to get to his parents. I told them there was an emergency with their son and that I was on my way to campus.

I didn’t have too many details – unsettling for me and definitely for his parents. I made it to campus in 10 minutes and went immediately to his room in the residence hall. As soon as I arrived, I was told of his passing. I called his parents to break the terrible news: Their 23-year-old son, Max, in the prime of his life, had died. The worst thing I have ever had to do. The worst day of my career.