From Class Clown to CLASS ACT

Posted on August 28, 2019 by Sonia Buchanan in Featured, Slider 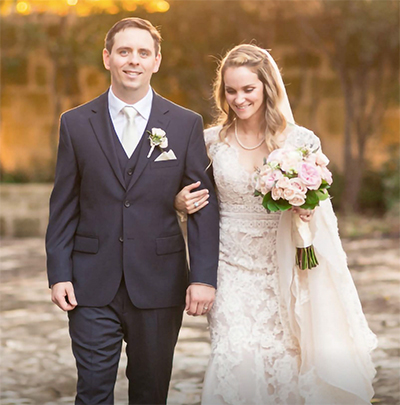 Dustin Huckabe and Emma Lewis, who both attended The Center for Collegiate Recovery Communities at Texas Tech University married in 2018.

Collegiate Recovery Student of the Year Dustin Huckabe proves that with recovery anything is possible.

It was dark, it was lonely and it was Dustin Huckabe’s self-described “moment of clarity.” He had hidden in his closet to shoot heroin. “I was in tears, and, for the first time in my life, I felt broken,” he recalls. He telephoned his best friend and finally admitted at 23 years old, after several years in the addiction-rehab-relapse cycle, that he needed help. His family was no longer in a financial position to help him; they had done all they could in the previous five-plus years. His mom simply said, “You know what you need to do.” He mustered the strength to detox for several days on his own; walked into an Alcoholics Anonymous (AA) meeting on May 26, 2011; and never looked back.

THE LIFE OF THE PARTY

In truth, the previous 10 years, from when Huckabe first became acquainted with marijuana and alcohol at age 13 until his epiphany in the spring of 2011, were hard to confront. He had experienced poverty, relocation, poor academic performance, a change in family dynamic when his mother remarried (and later divorced again), felony charges, failed attempts at sobriety and more. Even as an elementary school student, he had struggled. His mother, Felicia Casper, shares that Huckabe had ADHD, failed the first grade, was thought to have a learning disability and didn’t learn to read until he was in fifth grade. He compensated by being the class clown, he admits.

“He’s always been the life of the party,” agrees his mom. “That was one of the things his teachers always told me, no matter how utterly annoying he could be at times, he was so funny that they couldn’t get on to him.”

“To say I’m super proud is an understatement. I’m amazed. He amazes me every time I talk to him and he tells me what he’s been up to, what he’s been doing, what he’s working on. I’m so proud of how far he has come.” — Felicia Casper, Dustin Huckabe’s mother

Huckabe adds: “Yeah, I was deemed useless by my teachers and peers. I had teachers tell me that the best job I was ever going to get was flipping burgers.”

But, ultimately, their judgment (and his addiction) would not accurately forecast the path of his later life.

Prior to achieving recovery, Huckabe attempted community college. “I first enrolled in courses at Northwest Vista and San Antonio community colleges,” he says, “which I failed due to my inability to stay sober.” He also felt inadequate and ill-suited for academic success. “I [had] been in content mastery programs and special education programs all my life, mainly because of my behavior,” he says.

He didn’t believe he had the skill set to do well in college. But with the introduction to a young woman, 10 months sober herself, his outlook would soon change. Emma Lewis met Huckabe about the same time that he was committing himself to recovery. They became friends and started dating roughly two years later. 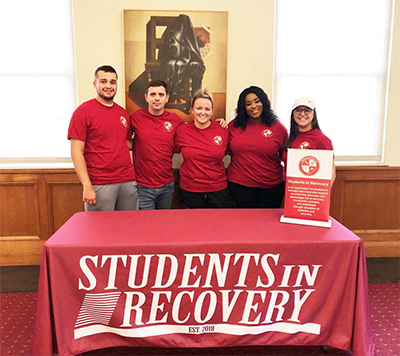 Dustin Huckabe, second from left, started the collegiate recovery community at the University of Oklahoma.

“When we first got together, he was having a difficult time finding jobs just because of his background,” Lewis says. “It was frustrating for him, so he was a little lost in, ‘What am I doing?’”

According to Lewis, because she was taking classes at the community college, she and Huckabe started having discussions about school. She encouraged him to begin again, to start slowly, with just one class.

“He did it well,” she says, and he was interested in trying to add more classes. Lewis then received acceptance to transfer to Texas Tech University, and Huckabe decided to move with her to Lubbock. He was fortunate in that the place he was working in San Antonio had a position open in Lubbock, so he accepted the job promotion and also registered at the local community college.

“All these little tiny decisions that we made, that were in my opinion God-inspired even though they may have been difficult in the moment, led to him being able to go to school,” Lewis says.

Acquaintances introduced Huckabe and Lewis to the recovery community at Texas Tech, and one of the people instrumental in helping Huckabe believe in his academic ability was Vincent (Vince) Sanchez. Sanchez has been working at the Center for Collegiate Recovery Communities at Texas Tech for 24 years and is currently its associate director.

When he met Huckabe, he also was working at a treatment center, where a position had recently opened. He hired Huckabe to fill it.

“I saw what a hard worker he was,” Sanchez says. “I saw how creative he was. I also saw how he was able to work with other people. He had different ways to engage people that were new to recovery.”

Sanchez wanted Huckabe to transfer to Texas Tech but knew that applying was a stretch for the young man emotionally and mentally. Students in recovery often carry past failures into the present, he explains, so they doubt their ability to succeed. “They need someone to believe in them,” he says, “so they can believe in themselves. It took a lot of pushing and saying: ‘I’m not going to let this go; you’ve got to come to Tech. You’ve got to become part of the CRC.’”

Huckabe adds: “Yes, Vince worked on me, trying to get me to apply. And I just told him, ‘I really appreciate that, but my background and really my fear of school are preventing me from doing that.’ He kept working on me.”

Ultimately, Sanchez’s pressure paid off. Huckabe applied to both Texas Tech and to the Center for Collegiate Recovery Communities at Texas Tech. Texas Tech denied him, but the center accepted him and gave him a scholarship, which overrode the university’s declination. He accepted and officially became a student at the university and, along with Lewis, an active member of the collegiate recovery community (CRC).

Huckabe stayed at Texas Tech until Lewis graduated and got a job offer in Oklahoma. The couple wed in 2018, and they relocated to Moore, Oklahoma, where Huckabe is a senior undergraduate student majoring in social work at the University of Oklahoma (OU) and plans to obtain his master’s in social work by 2021.

When asked to reflect on his progress, Lewis says: “It has been miraculous. He used to really, really doubt himself scholastically. We would talk and he would say: ‘I just don’t think I have the mental capacity to do it. No one has ever told me that I can do this and complete school at a higher level.’ It’s been really, really cool to see his confidence grow along with his passion when he found his niche.”

LAYING THE FOUNDATION FOR A CRC AT OU

It wasn’t easy to leave the recovery community at Texas Tech. “We talked about it,” Lewis says. Huckabe was resolute. He told her, “I can continue this collegiate recovery journey even though OU doesn’t have [a collegiate recovery program] and see if we can implement one.”

“He is dedicated to not only his studies, recovery and this organization but also to his friends and family.” — Anonymous quote from one of the six nomination forms recommending Dustin Huckabe as Collegiate Recovery Student of the Year

“It’s set him on fire,” she says, the admiration evident in her voice. “Going from ‘I don’t think I can do this [school thing] at all; let’s look at something else,’ to ‘let’s kick ass, do school and try to make this collegiate recovery program happen at OU’ has been cool to see.”

For help launching the program, Huckabe turned to Sanchez and John Shiflet, the director of Cougars in Recovery at the University of Houston who started mentoring Huckabe as part of the Association of Recovery in Higher Education (AHRE) and S.A.F.E. Project’s Collegiate Recovery Leadership Academy. Huckabe applied to the program and was accepted while he was transferring to OU.

His passion to bring collegiate recovery to OU morphed into a three-part leadership project. He launched Students in Recovery, hosting a sober tailgate in fall 2018; developed a weekly recovery meeting; and has been meeting with administrators to develop a school-sponsored collegiate recovery program (CRP).

Even before he became part of the leadership academy, Huckabe initiated phone calls to Shiflet for advice on how to find a recovery community at OU.

“He was persistent, interested and passionate about starting a program at OU,” Shiflet says. “We talked often about how he could get that program up and going there. Dustin is just as, if not more, passionate than all the leaders in the collegiate recovery movement. The thing I’m most impressed by is his drive and desire and his ability to bring students together on that campus in a short period of time. He’s been on the news, in the OU newsletter, in the newspaper locally. He is making his presence well-known in that community. He is not going to give up until he gets what he feels the students in recovery at the University of Oklahoma deserve, and that is a collegiate recovery program. He wants a program that will be there beyond him.”

In part because of his work at OU, Huckabe was nominated for — and won — a Collegiate Recovery Student of the Year award from ARHE.

Tim Rabolt, executive director of ARHE, shares why Huckabe is a strong candidate for the award: “He’s tenacious in his pursuit of service and excellence. He knows what’s right and goes after it with all his energy. He’s polite, compassionate and a true leader. He is absolutely deserving of this award.”

Although “shocked and humbled,” Huckabe admits he wanted to win the award — but not for selfish reasons. He wanted to win it to show the administration at OU that CRPs are legitimate, important and national.

“He’s not the one seeking attention,” Sanchez says of Huckabe. “He’s just trying to make a difference. He has such a good heart, and he really wants to do good things.”

For his part, Huckabe credits sobriety and collegiate recovery with saving his life and giving him a future.

“[Collegiate recovery] elevated my life in such a way that I don’t think I’ll ever be able to repay,” he says. “If I can help one student, to be able to give them something similar to what I got, then that’s what I’m going to do because I know what it did for me personally. It affected my life in such a profound way that this is what I want to do, if I can, for the rest of my life.”

Collegiate Recovery Students of the Year

Dustin Huckabe of the University of Oklahoma

Collegiate Recovery Staff of the Year

Kristina Canfield of the University of Alabama at Birmingham

Collegiate Recovery Advocate of the Year

Collegiate Recovery Philanthropists of the Year

Tom Hill of the National Council for Behavioral Health