Posted on September 12, 2019 by Sonia Buchanan in Slider, Sober Living 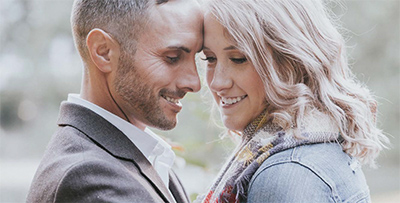 Josh Gibson and his fiancee, Kylie

Josh Gibson grew up doing all the things a normal kid would do — playing sports, watching football, taking college prep classes — and some things most kids in his neighborhood didn’t have to do: He spent most nights bouncing between his friends Rich and Ryan’s homes and went on vacation with their families.

“My dad drank every night,” says Gibson, who was raised in Chambersburg, Pennsylvania. “A lot of the time, I would escape from the situation.”

While in college at Coastal Carolina University in Conway, South Carolina, Gibson learned a more effective way to escape Roxy 30s. “When you’re in a household like the one I was raised in, there is always fear in the back of your mind,” he says. “The first night that I took Percocet, it was the first time I wasn’t afraid of anything. I felt more alive and driven than I ever had.”

By his third semester, Gibson was reliant on opiates, and everything in his life revolved around getting more of them. When he started injecting Percocet four times a day, he knew something had to change. He dropped out of school and moved back home with his mom; his dad had died in a drunk driving accident.

But coming home didn’t change anything. “You take yourself with you no matter where you go,” Gibson says.

A CRUTCH, NOT A TOOL

Gibson enrolled himself in a 28-day rehab program near his hometown. He relapsed six months later. “I was white-knuckling it,” he says. “And I was still drinking and smoking weed.”

He tried another short-term program. When he was discharged, he was offered Vivitrol. The brand name of a formula of extended-release naltrexone, Vivitrol is an FDA-approved medication for alcohol and opioid dependence that’s delivered via injection. “It lasts a month, and for that month, your opioid receptors are blocked,” says Sarah Church, a clinical psychologist and executive director of Elevate360 in New York. “That means no matter how much heroin or opioid medication you take, you can’t feel them and you won’t get high. The technical term for this type of medication is an opioid antagonist.”

With alcohol, it works differently. Church explains: “When someone drinks alcohol, they have opiates that are in their body that are released called endorphins. Those internal opioids are blocked by the Vivitrol, so it doesn’t feel as good when they drink. They still get drunk, but it’s not as reinforcing because the internal opioids that are released in their body when they drink are blocked, so it’s less pleasant and they are less likely to want to drink again.”

Gibson got an extended-release naltrexone injection and started participating in a daily outpatient program. “The first time I took Vivitrol, I took it because I knew I couldn’t get high,” Gibson says. “I thought I didn’t have to go to meetings because I couldn’t get high. What’s the point of getting better? It was a crutch, not a tool.”

He also kept drinking despite naltrexone’s effect on his buzz. When a urine test came back positive for alcohol, he was kicked out of the outpatient program.

Gibson enrolled in a three-month program and worked closely with mental health counselor Jenn Allen. “Drugs weren’t my problem,” he says. “They were my solution. I was the problem. That was the mindset that I had to obtain and put into action.”

And he did. When he left the program, Gibson got another naltrexone injection. This time, Vivitrol was just another tool in his toolkit, along with 12-step meetings, yoga, and meditation. “Medication-assisted treatment is a good term,” he says. “It takes more than just Vivitrol.”

Research shows that young people who receive medications shortly after diagnosis may be more likely to remain in care than those who receive behavioral health services only.

“What happens with opiate addiction is you think about opiates all the time,” Church says. “Once someone is on Vivitrol, it takes away those thoughts of using because they know that the effects of the drugs will be blocked. It opens them up to think about recovery because they’re not obsessively thinking about the drug. While they’re able to really engage in treatment, the therapist can help them identify their triggers, cope with their cravings, and deal with negative thoughts, moods, and anxiety.”

One of the biggest things Gibson learned from Allen was that it’s important that he do something he’s passionate about — and he lit up every time he talked about the culinary industry. His dad had owned a restaurant, and Gibson worked in restaurants early in his collegiate career. Someone in an Alcoholics Anonymous meeting told him about a job at a retirement community — a little more recovery-friendly than late nights at a restaurant with a bar — and Gibson jumped at the chance.

Today, Gibson is a sous chef at the four-star restaurant within the retirement community. He’s also engaged and owns a house with his fiancée in Chambersburg near his family.

“There are a lot of people who don’t have good support,” Gibson says. “Vivitrol gives them an opportunity to seek treatment and to get counseling while being sober. They might go to a meeting and meet someone who changes their life. They might seek out therapy while they have time when they feel safe. That’s an important feeling.”

5 Things to Know About Vivitrol

1 It requires full detoxification to use: “You have to fully taper off opiates to get on Vivitrol. Every day has to be opiate-free for between five to 10 days. If you can’t tolerate that, Vivitrol is not a good option for you. Buprenorphine, or Suboxone, can be initiated without going through detoxification. It only requires that you wait until withdrawal symptoms begin, and then it can be given as a rescue medication.”

2 Accessibility is a problem: “Many doctors are not equipped to administer it. Usually, you need to look for an addiction psychiatrist or internist. It’s an injection, and not all physicians are comfortable administering it. You have to seek out someone who is able to administer it. Alkermes has a website that lists providers who offer it in their medical practice.”

3 It’s different from Narcan: “Vivitrol is a long-lasting medication. Narcan is short acting. They’re in the same category in that they are both opioid antagonists, they both block opioid receptors, but Narcan only lasts for an hour or two and Vivitrol lasts a month. Narcan is a rescue medication that is frequently used for people who overdose.”

4 The research is clear: “The FDA approved Vivitrol to treat opioid-dependent patients in 2010. Studies show that people addicted to opioids more than halve their risk of dying due to their use of opioids if they stay on maintenance medication. The most recent study showing that Vivitrol is effective was through the Clinical Trials Network at the National Institute on Drug Abuse.”

5 It’s not just replacing one drug with another: “If you’re taking it as prescribed by a doctor, it’s medicine. It’s part of your recovery. My personal opinion is that people should try to take it for six months to a year. But it really depends on how stable they are in their recovery, what their support network looks like and if they are still having cravings. It’s a decision the patient and their medical providers need to make collaboratively.”