Home / News / Why Would I Want To Read Another Book About Addiction?

Why Would I Want To Read Another Book About Addiction? 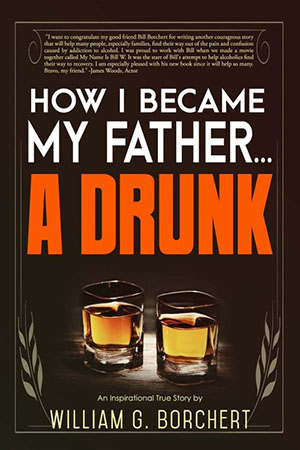 If there is one book on your recovery booklist for 2016, I’d recommend William (Bill) Borchert’s newest jewel, How I Became My Father…A DRUNK.  It’s a well-written, heartfelt story about the unfolding drama of generational addiction and recovery and the influential role of the family.  It’s a great read not just for students and young adults who are struggling with addiction, but also for their families and extended families who can support them in recovery.

The book is engaging, entertaining, and offers hope.  Borchert is an excellent writer. Through his personal stories he shares both the horrific tragedy and paradoxical humor of growing-up with his alcoholic father and enabling mother.

The unfolding drama provides many enlightening, ‘ahaa’ moments, as Borchert comes to grips with the fact that as much as he despised his parents for his painful childhood, he then went on to create the same horrific dilemmas for his wife and children.

If you don’t know about author Bill Borchert, he’s written a number of best-selling books and award winning movie screenplays including My Name is Bill W and Lois Wilson’s story about founding Al-Anon, When Love Is Not Enough. My Name is Bill W is the most watched TV movie ever made and was nominated for a number of Emmy’s and Golden Globes.  Renowned actor James Woods won the Emmy Award for his role as Bill W.

In reading How I Became My Father…A DRUNK, I got the sense that it was a very personal and touching venture for the seasoned Borchert.  I interviewed him for this review and he explained that the previous books he’s written were about other peoples’ lives.  This was his first writing journey into his own dark journey (and soul).

Borchert helps readers understand the generational impact of addiction.  He clearly articulates how addiction not only influences, but lives deep in the genes, beliefs, and behaviors of future generations.  It’s supportive and freeing to see and understand that although we are each personally responsible and accountable for our choices, there are also familial patterns that make each of us more vulnerable.

Although the book title alludes to issues between fathers and sons, I must say that after reading it the story is certainly not gender specific.  How I became My Father…A DRUNK speaks to all genders, family positions, and ages.  Borchert’s writing style and story are both engaging and illuminating.  I wish that it was required reading for all college students, whether they’re struggling with addiction or not.

I give How I became My Father…A DRUNK a strong five stars.  The paperback and Kindle version are available at Amazon.com.  For more information about William (Bill) Borchert, please visit his website:  williamborchert.com/.

Larry Sagen was originally trained as a family therapist.  Over the last 20+ years he founded and directed two North American nonprofits.  In “retirement” Sagen has founded reFrame Entertainment, producing and publicizing films, books, music, and events that help people to overcome personal and systemic challenges.