Posted on August 31, 2015 by Sonia Buchanan in Testimonials 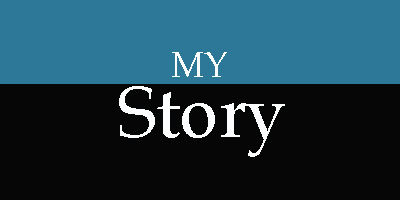 I still remember the look in my mother’s and father’s eyes when I tried to explain to them that I would be smoking weed for the rest of my life.

“What about your job after college?” they asked.

“I won’t take a job that won’t allow me to smoke every day.” Simple answer.

The look was sad, not even disappointed. They were sad because they were witnessing their daughter freely give up her potential in exchange for a buzz. My mother sighed and shrugged her shoulders. My father looked at me hard and then turned away.

That conversation took place only days before I walked into my first 12-step meeting. It was suggested that I try a meeting by a trusted counselor who I had been seeing for a few years for other mental health issues. Lately I was struggling and wasn’t honest about how bad it was. I was living under an illusion of control, and I thought I could figure my way out of failing school while still maintaining my excessive drug use. For reasons I can’t explain, I took the suggestion and went to the meeting.

It still seems blurry, possibly from the marijuana, but I do remember a list of questions read in the introduction of the meeting to help newcomers determine if they had a problem.

Do you ever get high alone? Has smoking stopped being fun? Does your use let you live in a privately defined world? Has smoking affected your motivation, memory, or concentration? Do you smoke weed to cope with your feelings? Do you use to avoid your problems? Have you ever failed to keep promises about cutting down your dope smoking?

I was in shock. How did they know? It was in that moment that I knew I could never go back. But I didn’t know how to move forward either. It was like finding out a secret. There was no undoing it.

I was an addict.

And then I used the second I got home. 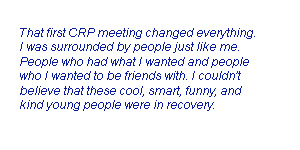 I went back to that meeting the next week, and I used after that meeting too. I continued to go to those meetings, and sometimes I could stop using for a couple days. But by the next meeting, I would have only a day or a few hours sober. Despite the hopelessness, I kept coming back.

After a few weeks, I met someone in that meeting that heard me share my struggle to stay sober while living on a college campus. They directed me to the Collegiate Recovery Program (CRP) at the University of Michigan. It was a university resource dedicated solely to supporting Michigan students in recovery. I had never heard of it, but it honestly sounded too good to be true.

I went the following week.

That first CRP meeting changed everything. I was surrounded by people just like me. People who had what I wanted and people who I wanted to be friends with. I couldn’t believe that these cool, smart, funny, and kind young people were in recovery. They had completely shattered all my fears about living in recovery on campus. They knew how difficult it was to get and stay sober, and they understood the added pressures of being a college student. I saw it working. I saw hope, and, for the first time, I felt hope.