Home / Featured / The Rhythm of Recovery

The Rhythm of Recovery

Posted on February 24, 2015 by Sonia Buchanan in Featured, Slider 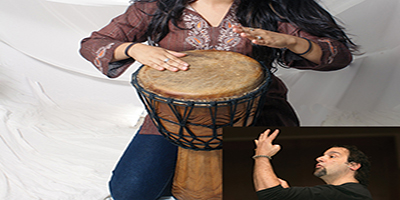 Drummer John Scalici reaches students in their gut and soul

Musician John Scalici has been marching to his own beat most of his life. For the past decade and a half, he has used that beat to help make connections with people from all walks of life, facilitating workshops and drumming programs for corporations, schools, and other groups throughout the United States and Japan. Scalici believes rhythm is a way of living a healthy, positive life full of inspiration and promise. Now Scalici is turning his attention to helping college students overcome addictions to drugs and alcohol.

Scalici utilizes several types of drums. Most drums have some cultural and ceremonial uses attached to them, so to use them in a healing, therapeutic modality is nothing new. “They may think that what they’re doing is new age, but I tell them that it’s a very old method of connecting to the rhythms inside of us. I say to these students, ‘Give yourself over to this process for the next hour, and you’ll make some discoveries about yourself.’”

Drums, their rhythms, and the people who play them have been in existence for hundreds if not thousands of years. Scalici is one of a new breed of trained, Therapeutic Drumming Facilitators who understand the therapeutic value of drums. Along with counselors and therapists, Scalici bridges the gap between the patient and the therapist, skill-fully crafting activities and games which are designed to stimulate dialogue in the session. “This is drumming specifically for therapeutic outcomes,” Scalici says.

Scalici works with young adults dealing with addictions to heroin and prescription medication, many of whom come from solid families, highly educated and motivated, but also vulnerable to the release that drugs can initially offer. Scalici says it’s important to build a rapport with young adults, to try to find a personal connection in order to build a sense of trust and camaraderie. “They haven’t done a lot of growing in college,” he says. “They’ve fallen into a pattern, and we use that word on a regular basis. We use the words ‘pattern’ and ‘rhythms’ so that we can better reinforce what we’re doing.” 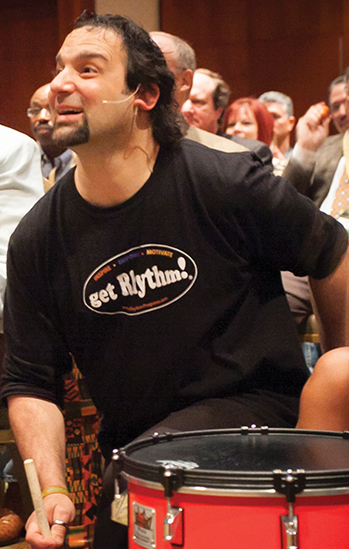 John helps the patients see that focusing on their own rhythm is key to Recovery- it’s important not to let the distractions of the world, of life, throw you off track.
-Leslie Plaia, Counselor-Substance Abuse, UAB

Scalici also makes a connection based on his own personal experiences. Growing up in what he calls a fairly typical Catholic-Italian home in Birmingham, Scalici says he rebelled from his father by experimenting with drugs and alcohol in high school.

While studying communications and psychology at the University of Alabama, Scalici also found time to play drums in a college rock band. Eventually he formed an all-original band and found great joy in writing songs and touring the country, opening shows for some great bands like Government Mule, the Allman Brothers, Buddy Guy, and Widespread Panic.

Despite the success, Scalici wanted to do more and dive deeper into the forgotten power of rhythm. This decision would allow him to serve others instead of perform FOR others.

In the late 90s, Scalici discovered the djembe, trading in his drum sticks for his bare hands. He says something about playing the djembe reconnected him with why he first began playing drums. While this wasn’t the moment he stopped using recreational drugs, he says, it was the catalyst that eventually led to his recovery. “That was the point that I decided ‘wow, this is very powerful,’” he says. “It can relieve stress. It can help me focus my attention. It can connect me with my inner rhythms. It can connect me with why I love rhythm and drumming in the first place. It was therapeutic.”

Scalici says his personal story helps his students open their minds and overcome their fears of trying something so new in this vulnerable social setting. He’s able to empathize with them, helping them to realize he knows the challenges they’re facing and is there to assist them in reaching their destinations on this shared journey of recovery. “I’m coming at this from a point of experience,” Scalici says. “I tell them how lucky they are to be in a program like this, and that this is not the end of the line. It’s the beginning of the next phase of their lives.” 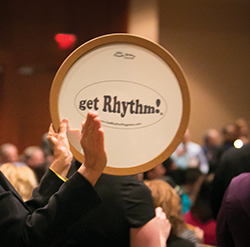 Be who you want to be

Scalici says the goal of any therapeutic drumming program is centered on personal expression, interpersonal connectivity, and learning to deal with uncomfortable situations in a healthy manner. In conjunction with a therapist, Scalici says the first step in leading to a breakthrough is letting them know that there are no mistakes, but ultimate success depends on how willing they are to immerse themselves in something new and unfamiliar. “I let them know you really cannot mess this up, but at the same time, you do have to take a calculated risk. You have to step out and do something that you’re not very comfortable doing,” Scalici says.

“This act of vulnerability with our programs opens up a pathway for a lot of dialogue between the therapist and the participants, and also between the participants themselves. It lets them know that this is okay. ‘I can be myself without drugs or alcohol, and take a healthy risk and enjoy it and be strengthened by it. ‘”

As for the drumming itself, Scalici says it’s not about the music being created, but it’s about the process. The quality of the art or the rhythms being created is of secondary importance to the self-discovery. In addition, Scalici says, therapeutic drumming is not about simply pounding out one’s frustrations on the instrument. “It’s not just banging on a drum,” says Scalici.

“You can’t play the drum angry. You can express anger on the drum, and there is a difference,” he adds. “I don’t let them beat a drum in anger, but I do help them express anger on the drum.” For instance, Scalici may have a participant drum at a fast temp or loudly, helping him or her to feel the anger but drum in a relaxed manner. Scalici says the goal is to help a participant channel and diffuse that emotion through drumming.

During a session, Scalici talks about the bass beat, or the mother beat—the lowest frequency of the drum. Scalici will have the participants start off playing the bass note, which anchors all of the other rhythms. Once they have a handle on the base note, they can launch into more complex rhythms and, therefore, achieve a greater sense of self-discovery. They can also make a connection between getting into a literal rhythm with being in sync and in rhythm in their personal lives.

Scalici understands the reluctance someone may have the first time he or she walks into a group session and sees a bunch of drums sitting in a circle on the floor. However, he says drumming as a means of healing and creating a sense of community are concepts understood by almost every culture in the world. Further, the idea is gaining more and more acceptance as a viable addition to treatment and is complimentary to existing treatment goals.

“You can sense it with your eyes and your ears. These patients make breakthroughs, and then you see the smiles, and it becomes transformational.” And that is one of the payoffs of the power of rhythm.