Posted on January 26, 2015 by Sonia Buchanan in CRCs, Featured, Slider 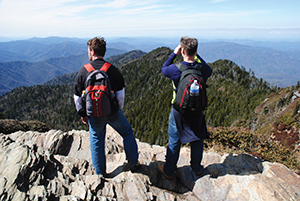 From its start three decades ago, Rutgers has not just supported students in recovery, but successfully housed them.

Rutgers comes only second to Brown University in starting a recovery program on campus.

“I was hired to start this program in 1983. It’s been 31 years,” says Lisa Laitman, director of the Rutgers Alcohol and Other Drug Assistance Program (ADAP) and a pioneer in the nation’s campus recovery field. The collegiate recovery program (CRP) forms only a part of Rutgers’ overall ADAP program. “We work with students in need of treatment as well as run a CRP,” adds Laitman.

“We ran a recovery group right from the start. We had four students. They wanted to meet other students to create a bond while on campus,” says Laitman. “It’s the same reason all CRPs have started since then. Students want a peer group.”

The first university in the country to establish recovery housing, Rutgers opened its residential dorm a mere five years after starting its recovery program. Now in its 26th year, it’s tucked off the beaten path on the biggest of Rutgers’ three campuses — New Brunswick. “You don’t have to hear or see things, but you’re still part of the university,” says Keith Murphy, the recovery counselor for ADAP. He oversees the residence hall, called Recovery House. In respect for the residents’ desire for anonymity, it displays no signage, and its exterior never gets publicized.

About half of the 80 students in the CRP reside in the building. “Of those not in Recovery House, some have lived in it at some point and then moved out for grad work, or they’re juniors and seniors who want to live on their own,” Murphy says.

Twenty-five miles north at the Rutgers-Newark campus, the recovery housing consists of several rooms on a floor in an apartment building. “It’s not ideal,” Murphy says, “but having a sober community living together of any size is a benefit.”

“The parents are the ones who really appreciate recovery housing,” Laitman adds. “They understand the need for their children to have a supportive living community.”

The New-Brunswick campus residence hall consists mostly of double rooms with shared bathrooms and kitchens. Unlike regular residence halls, there’s also a common room. “A place to hang out and be seen,” Murphy says. “The boys command the basement common room.” The second floor is a dedicated study room.

“But I tell students it’s important to get away from where you live to study,” says Murphy. “I tell them to go to the university library for one to four hours and don’t take your phone or computer.”

When anyone achieves a 4.0 during a semester, he or she is rewarded with an elegant dinner at a fine restaurant. “Students strive for that,” says Laitman. “We do a lot to support their academic achievement as they try to build a new life.”

It’s that kind of attention to its recovery students that makes Rutgers’ size not impact their success. “The advantage to smaller universities is having more personnel per student,” says Murphy. “But we provide that small-school attention in a state university setting.”

Besides the housing option and ADAP resources, the 80 students in recovery have access to Murphy, a full-time counselor with seven counseling certifications, and two other staffers. “They’re required the first year to attend group counseling each week with me, and weekly individual counseling,” he says. The program staffs four counselors at Rutgers-New Brunswick and two at Rutgers-Newark. 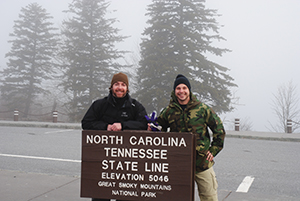 Alumni in the Great Smokey Mountains.

All students also must attend a minimum of two 12-Step meetings a week and the monthly house meeting. “At the house meeting, we get to see the whole community, everybody together, and we discuss issues, like activities, outreaches, or if there’s been a relapse,” Murphy says.

The meetings are also the place to solve any contentions that arise from living together. “Common issues come up,” Murphy says. “We tell them these are the same issues they’ll face throughout their life, like in marriage and work.”

Binding the group even more tightly are the 140 social activities arranged by the CRP.

“Our students train for and run 5K races, hold barbecues for current and past students, go hiking, attend professional sporting events, and, on rainy days, they may go grab some food or see a matinee. During spring break, they spent three days in the Smoky Mountains of Tennessee.

“Not everyone does everything,” says Murphy. “Sometimes we get 60, and sometimes we get five. But there’s always something available. The more activities and events students engage in, the more successful they’ll be sobriety-wise — academically and socially too.”

The CRP also encourages recovery students to do internships and study abroad. “We push for them to study in major world cities because of the recovery support,” explains Murphy.  “We’ve had three students go to Rome for example. We have strong AA contacts in Rome. We’re totally connected there,” says Murphy. “Recovery students have a huge advantage over non-recovery students in the abroad program because they have a network in place before they arrive.”

The statistics on Rutgers’ program prove its effectiveness.

The average GPA stands at 3.23, but rises to 3.4 for students in the program longer than a semester. Their abstinence rate has averaged 95 percent for the past 10 semesters.

The number that pleases the administration most is the retention rate. “We can say every semester that 98 percent of our students return or graduate,” Murphy adds. That’s 13 percent higher than the average at Rutgers. 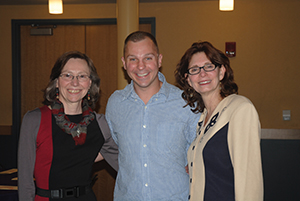 For any CRP contemplating a residential component, Rutgers advises having a strong 12-Step community in play, good staffing, and not housing recovery students with other sober populations to fill numbers, even children of alcoholics. “It’s not the same as being in recovery, and you’re compromising the integrity of the program,” Murphy says. “You have to think about the program long-term, not year to year. Build slowly, just like a business.”

About 600 students have gone through Rutgers’ program. “We have had reunions at 10, 20, 25 and 30 years,” Laitman says. For each, about 130 students and alumni pour in from across the country. They sit at tables based on their years in recovery. “There were plenty of tables where alumni had 10 to 30 years of recovery,” she says.

The Recovery Reunions are an opportunity for alumni in recovery to connect on the issues that bonded them during their college years. “We had a whole table of people in their 40’s and 50’s,” Laitman recalls proudly. “It was just wonderful.”

Rutgers University at a Glance 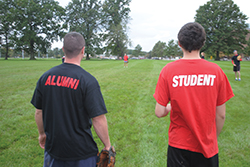 Campus Character: Chartered in 1766 as Queen’s College, Rutgers is the sole university in the United States that is a colonial college, a land-grant institution, and a public university.

Academic Offerings: Thirty-three schools and colleges, including New Jersey’s foremost pharmacy school. Offers more than 4,000 courses, with more than 100 undergraduate majors and 200 graduate programs and degrees. One of only 62 members of the Association of American Universities, a select group of leading research universities recognized for their quality and scope of research and educational programs. One of the top three philosophy faculties in the English-speaking world, along with NYU and Oxford.

Points of Interest: Rutgers-New Brunswick hosts one of the nation’s largest campus solar arrays. Rutgers Gardens covers 50 acres on the outskirts of the campus. Jane Voorhees Zimmerli Art Museum houses 17,000 works of dissident art from the former Soviet Union. The Rutgers-Newark campus was named the nation’s “most diverse” for 16 years running in U.S. News & World Report’s ranking of America’s Best Colleges. The birthplace of college football. The Institute of Jazz Studies at Rutgers–Newark holds 100,000 recorded works of jazz.