Home / CRCs / All About the Journey

All About the Journey

Posted on October 18, 2016 by Sonia Buchanan in CRCs, Slider 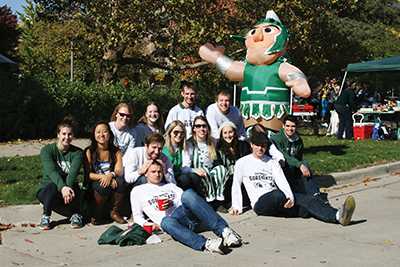 Michigan State University launches its collegiate recovery community by opening doors to everyone — including those just considering living a sober life.

That was the philosophy of three students who met in a recovery support group at Michigan State University (MSU) Health Services in early 2013. They wanted to give themselves a name, something to solidify their solidarity.

They called themselves the Traveler’s Club, and the name stuck.

Flash-forward three years, and the Traveler’s Club is now an official student organization at MSU, with 10 solid members and growing. It’s an important first step in recognizing that students in recovery exist on campus and in creating a place where they can be themselves, says Emily Young, health promotion specialist.

Young, who has been in recovery for four years, knows how difficult sobriety can be on campus. “When I got sober as a junior, there were no recovery supports in place on campus. It was lonely, scary and I felt isolated from my peers,” she says. “Before I found recovery, I did not think it was possible to be sober in college. I did not think sober students even existed — especially those who were sober by choice.”

She decided to do something about it. When she became a student intern at the school’s Student Health Services in 2013, she set her sights on obtaining a grant from Transforming Youth Recovery to establish a CRC. Things moved quickly after that, and by fall, the new group was ready for members. “It’s amazing to have the opportunity to start a program that is so close to my heart,” says Young, who was hired full-time after graduation.

Bradley Allen, who began attending meetings around the time Young was hired as an intern, was one of the Traveler’s Club’s earliest members. Sober since 2010, Allen arrived at MSU the summer of 2013 after receiving his associate’s degree from a community college. “I was a freshman at that community college for three to four years. I would sign up for credits and fail repeatedly. I did this so that I could tell people I was in school,” he says. “I made two attempts to get sober during that time, but was on the fence about it. I knew that being sober was the right thing to do — it was what I wanted — but it didn’t click for me until the second time I went into treatment.”

When Allen returned to school with a new focus on his studies, his goal was to transfer to MSU. “MSU was always my dream school — it’s where my parents and most of my friends went,” says Allen. He earned his bachelor’s degree in psychology in 2015 and next year will graduate from the school’s Master of Social Work program.

Allen and her — considering the idea of being in recovery — and decided to not have a sobriety requirement for membership in the Traveler’s Club. “Within this age group, there are a lot of students who are in a contemplation stage, so opening our doors to those who may not be completely ready to maintain abstinence does a lot to plant a seed,” she says. “We want to encourage those who are considering a life in recovery to check us out so they can see that there are real students maintaining sobriety, having fun and being successful. It’s not that strange of a thing.”